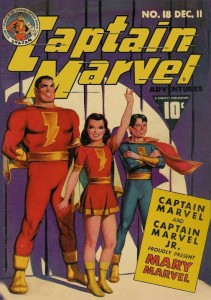 Captain Marvel was originally a pink skinned kree product of interbreeding to avoid the evolutionary dead end of the empire. He became captain very young and was assigned to vessel Pama to fight the skrulls. There he fell in love with doctor Uba, who was also desired by his superior Colonel Yon-Rogg. Eventually, the trio was sent to Earth on a mission to recover a Sentry, a kree probe robot that the 4F had recently awaken. Yon-Rogg sent Marvell to Cape Canaveral, where the robot was being held. In his way, he witnesed the death of one of the place scientists, Dr. Lawson, and impersonated him to get to the Sentry. He then met Caron Danvers, who got attracted to him, but he remained loyal to Una. Meanwhile, Yon-Rogg remotely activated the robot to kill Marvell, but he defeated it and, in his kree uniform, was presumed to be a superhero. Marvell stayed on Earth to keep an eye on humans, specially after Una was killed in battle.
At some point, Marvell was manipulated by Ronan and Zarek, two officials that planned to destroy the Supreme Intelligence. They gave superpowers to Marvell so that they could blame him with the destruction of Hala, but he managed to save the planet. It turned out that, in fact, the Supreme Intelligence had been manipulating them all, but, impressed with Marvel, it let him keep most powers. While he was returning to earth, Marvell got absorbed into the Negative Zone, where he made contact with Rick Jones. He directed him to a kree base which held the Nega-Bands. Slashing them together, Rick and Marvell could swap places.
Eventually, Yon-Rogg attacked Marvell again. He took Carol Danvers hostage and threatened to activate a PsycheMagnetron, the kree’s most powerful weapon. As the weapon overloaded, Marvell chose to save Carol and left Yon-Rogg to die, but the released radiation imprinted some of Marvell’s power onto the woman, who became Ms Marvel. After that, Rick got access to the Baxter Building and used Mr Fantastic’s gate to the Negative Zone to bring back Marvell.
When mad Titan Thanos tried to seduce Death by using the Cosmic Cube to alter reality, the keeper of cosmic awareness Eon tested Marvell and decided he was worthy to become Protector of the Universe. However, since he had not at the time the Quatum Bands that the Protector should receive, he granted him instead cosmic awareness. With it, he defeated Thanos. Also, after finding himself a pawn in the Supreme Intelligence’s plots once more, he turned against it and definitely left the kree empire.
At some point, he helped the people of Titan against their own computer, who had been corrupted by Thanos. Marvell met Elysius, a liutenant who switched sides, and fell in love with her, bringing her to Earth with him. However, Marvell’s exposure to a nervous gas in a fight against villain Nitro had caused him cancer and he died in bed. Thanos, however, was waiting for him to fight, so he could die as a warrior. Marvell was considered the best warrior of the universe and even skrulls gave him a medal. His spirit visited many heroes after his death, including his successor as Protector of the Universe, Quasar, and the Silver Surfer.
Elysius, trying to cope with her loss, used some Marvell’s genetic matter to impregnate herself and gave birth to a boy, Genis, and a daughter. Genis decided to follow his father’s steps and become the new Captain Marvel.