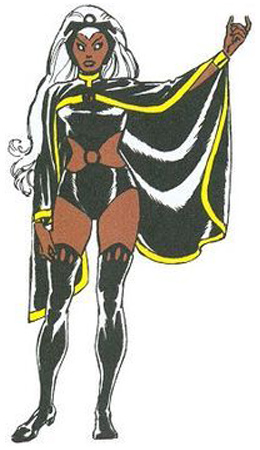 Ororo Munroe is descended from a line of African witch-priestesses which can be traced back to the dawn of humanity. All of the women in this line of descent have white hair (throughout their lives) and blue eyes and the potential for magical abilities, while the men have none of these attributes. Ororo’s mother, N’dare, was a princess of a tribe from Kenya that has yet to be identified. N’dare married American photojournalist David Munroe, and while living with him in Manhattan, Ororo was born. When she was six months old, she and her parents moved to Cairo, Egypt where her father was on assignment.

Five years later, Ororo’s Egyptian home was destroyed during an Arab-Israeli conflict. Ororo’s parents were killed outright. Ororo found herself buried under the rubble of her home beside her mother’s corpse. This event traumatized Ororo so that today she still suffers from claustrophobia, the fear of being in a confining space For a while after her parents’ deaths, Ororo wandered the back alleys of Cairo until she was found by children working for their Egyptian master–Achmed el-Gibar. Achmed el-Gibar taught children to steal for him, and Ororo became his prize pupil. Within a year she became the most accomplished sneak thief and pickpocket in Cairo. Achmed el-Gibar also taught her to become a superb lockpick and escape artist. Then, she had a short encounter with Xavier.

When Ororo was twelve, she felt a strong inner need to go south. She spent a year travelling by foot from Cairo across the Sahara Desert until she reached the home of her ancestors, the Sorengeti Plain, which lies in both Kenya and Tanzania. During this long journey she encountered the young T’Challa, who would one day become the Black Panther. Ororo came to live on the Serengeti Plain beneath Mount Kilimanjaro. By this time her mutant power to control the weather had emerged, and she used this power to help several local tribes, who worshiped her as a goddess. In helping these tribes, Ororo developed her sense of responsibility to use her abilities for the benefit of others. She contentedly spent a number of years in the role of “goddess” until

Professor Charles Xavier came to Africa and persuaded her that she should use her powers to benefit all humanity by joining the X-Men. Ororo did as Xavier asked, and he gave her the code-name Storm. When the X-Men first clashed with the community of mutant outcasts called the Morlocks, Storm fought in personal combat with the Morlock’s leader, Callisto. In defeating Callisto, Storm became the new leader of the Morlocks. Storm remained with the X-Men, and allowed Callisto to rule in her absence, but the Morlocks must now obey Storm whenever she returns and gives them orders. Storm’s mutant powers created a psychic bond between herself and the primal life force of the Earth’s biosphere. This link may have been broken by a long stay in outer space with the X-Men while battling the Brood. This may be one of the factors underlying Storm’s subsequent drastic changes in her attitudes, hairstyle, and manner of dress. Storm’s fellow X-Man, Rogue, was wrongly accused of murdering an agent of the intelligence agency SHIELD. Greatly distraught over personal matters, Rogue left X-Men headquarters and secretly went to Mississippi, where she had once lived. Storm followed her there seeking to help her.

Meanwhile, Henry Peter Gyrich and Valerie Cooper, of the U.S. federal government and accompanying troops were hunting down Rogue. Gyrich, an agent of the National Security Council, had, with presidential authorization, obtained the only working model of an untested “neutralizer” device created by the inventor known as Forge to deprive a superhuman being of his or her superhuman powers. Storm found Rogue, but then they were found by Gyrich, Cooper, and thier troops. Forge, who objected to Gyrich’s obtaining the neutralizer, physically attempted to prevent Gyrich from using the device on Rogue, but Gyrich instead shot Storm with it as she attempted to protect Rogue. Her superhuman powers apparently entirely removed, Storm fell into a river, from which Forge rescued her. Feeling guilt and responsibility for her loss of her powers, Forge brought Storm to his headquarters in Dallas, Texas. There Storm revived, and she and Forge grew strongly attracted to each other. However, when Storm learned that Forge had designed the neutralizer gun that had deprived her of her powers, she felt betrayed and hated Forge.

Storm left the X-Men for a time to return to Africa, where she regained her peace of mind. She returned to her role as leader of the X-Men despite having no superhuman powers. Storm eventually regained her powers. Soon after this, the X-Men apparently “died” while battling the being known as the Adversary. The X-Men lived in an Australian complex for a time. During this period, Storm was apparently killed by a being called Nanny. She was actually kidnapped and later escaped. However, somehow Nanny had caused Storm to regress to an adolescent age. Storm found herself in New Orleans, Louisiana where she teamed with the mutant thief called Gambit. Storm and Gambit eventually returned to the X-Men. During a clash with the Genoshans, Storm was captured and subjected to a process that returned her to her proper age.

Storm was appointed leader of the X-Men’s Blue Team when it was decided to split the group. Storm continued to have many adventures leading the Blue Team. She returned to Cairo and was reunited with Acmed el-Gibar, who had trained her in the art of thievery. He was dying, and she agreed to look after the children he had taken in. Recently, Forge proposed marriage to Ororo. She would have said yes, but before she could do so, Forge left the X-Men deciding that she could never give up her role. This hurt Storm greatly, and it remains to be seen how their relationship will progress. Storm continues to lead the X-Men’s Blue Team capably. How she handles the tasks before her is unknown, but she has continually presented herself as a woman who can handle any situation. Her mutant power is the psionic ability to manipulate the weather.

Group: X Men Leader of the Morlocks (if there’s anyone left)