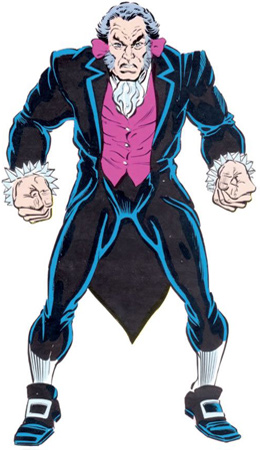 Born to a poor family, Shaw built an empire from nothing and joined the Hellfire Club also thanks to his mutant powers, but was not taken seriously by the members of the Inner Circle. One night, as a party was being held in the club, they were attacked by the Sentinels, who seemed to be particularly interested in Shaw himself. Thanks to the teleportation powers of his spanish girlfriend, Shaw managed to escape, but as he realized he had been betrayed by the current White King, he wanted to return and take vengeance against the girl’s advise. As they returned, a Sentinel threw a pike against him, but Isabel managed to put herself between Sebastian and the weapon and died instead of him. Sebastian, enraged, killed both the White King and White Queen, and became a pitiless man, capable of anything to climb up social positions. Shaw took the charge of Black King, being his mutant power the ability of absorbing any impact he receives to increase his own strength. He made many contacts in the government, always keeping an eye in the Sentinels project, and became friend (at least, so thinks the senator) of Robert Kelly. He raised his son in the club spirit, punishing his mistakes with no heart at all. The only true friends that he seemed to have were his assistant, Tessa (a very efficient cyborg), Emma Frost, his White Queen, and Harry Leland, the late White Tower, but even those relationships were cooling as Shaw was more and more obsessed with destruction. At last, he was fired of his charge by Magneto, who was the White King by then, with the support of Frost and Selene (Black Queen). Things went worse as Shinobi, his own son, returned and partly in vengeance and partly in his greed for power, tore his heart outta him using his mutant power. Shinobi took then his father’s empire and ruled instead of him in a new Hellfire Club. Now, Shaw seems to be dead, but … is he? (Shaw has already appeared again)