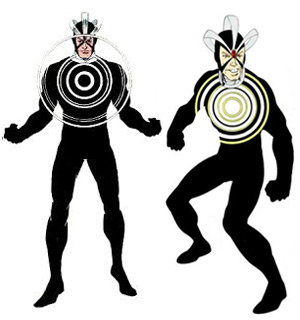 Alex’s father was a pilot. One day, flying with his family, their plane was captured by an spaceship from the Shi’Ar. Scott and Alex jumped from the plane, but they had just one parachute, so the fall produced Scott a commotion, which in the future would not allow him controlling his mutant power: An optic ray of high intensity, capable of breking walls, only contained by rubi glasses that Scott must always wear. Due to this, and since them both where taken to an orphanage (ruled by Mr Sinister), Scott was never adopted, but Alex was intermediately taken away, living a happy childhood. Alex studied Geology, and lived quite apart from the super-heroes, until one day, he was kidnapped by the Living Pharaoh, who was planning to use Alex’s power (absorbing cosmic radiation and producing energy from this; he usually has to free this energy as a blast). Alex was rescued by the X Men, and met Lorna Dane (Polaris). He stuck with them for a while, but, after the incident with Moira’s son (Mutant X) he began to scare from death, and after the Krakoa fight, he left with Polaris, to work with her in their Ph degree. Later, after the Marauders attack during the mutant massacre, Lorna disappeared (well, now we now she was possessed by Malice), and he rejoined the X Men (not that he had much choice, since Psylocke suggested to kill him to keep the secret of their roundabouts) There he stayed for a time, holding a relationship with Maddie, his brother’s wife, who was really using him and turned him into her consort during Inferno. Maddie died and Alex recovered, although even less optimistic than he used to be. He met Lorna again in the Savage Land, where she had trubles with her sis, Zaladane. Alex had been in the X Men until they all crossed the Perilious Siege in Australia, escaping from the Reavers. He lost his memory and joined the Magistrates in Genosha, until X-tinction Agenda, when he met again his partners and fought for the mutates freedom. Later, he joined X-Factor, as campaign leader -Val Cooper was the administrative power-, with a short absence after Madrox’s death, but after the AoA he definitely left the team. Alex sacrificed his life to save the world, but Lorna was sure that he is not dead. His current whereabouts are unknown. He is involved with the mutant terrorists known as the Brotherhood.